Turkey warned the world’s oil shippers they will need to prove they’re insured to cross the country’s vital straits, a move that could restrict flows of Russian oil as new European sanctions kick in.

The new rule starts Dec. 1, a few days before the European Union and UK impose additional curbs on Russian trade that will make it much harder for tankers carrying the nation’s oil to get insurance.

Because the insurance covers everything from oil spills to collisions, Turkey is in effect seeking to protect its waters, but it could also affect the flow of millions of barrels of Russian crude exports. 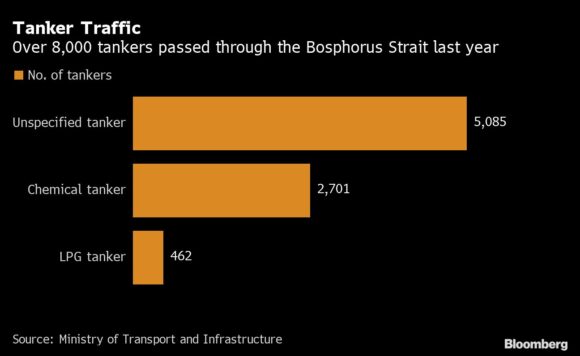 Ships hauling oil through the waterway and the nearby Dardanelles strait will be required to provide a letter from their insurer saying that cover will be provided for that specific vessel voyage and cargo, the Turkish Ministry of Transport said in a circular.

The European Union and the UK commence aggressive sanctions on Russian oil shipments on Dec. 5 that will dramatically affect the availability of industry standard insurance.

Russia shipped almost 650,000 barrels a day of its own oil through the straight from its Black Sea port of Novorossiysk over the past six months, loading programs compiled by Bloomberg show. A nearby Russian port exported almost 1.3 million barrels a day of cargo from Kazakhstan.

A director from the Turkish institution governing maritime traffic confirmed the letter, and said the motive behind it was to comply with EU sanctions even though Turkey is not part of them.

The director said the move could well impact Russian tankers if they struggle to obtain the necessary protection and indemnity insurance, which covers owners against liabilities such as oil spills. The measure should boost maritime safety along the Turkish straits, he said. 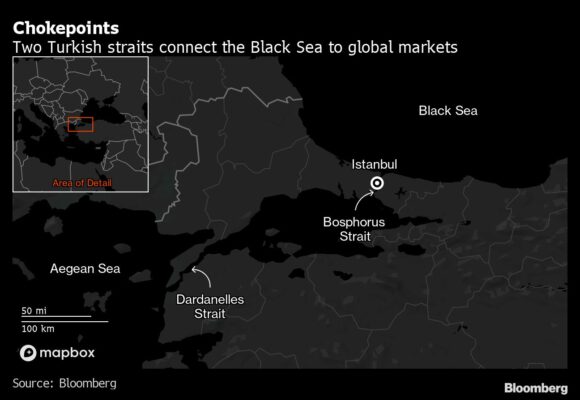 Under the EU and UK sanctions, vessels will still be able to get industry standard cover, provided the cargoes being transported are purchased below a yet-to-be-determined price cap.

If ships sail through the straits uninsured, there could be significant damage to the waterway and vessel traffic could come to a standstill if an uninsured ship has an accident, the circular said. As a result, a letter guaranteeing insurance cover is considered a solution to this problem, it added.

The International Group of P&I Clubs is based in London and organizes the cover of 95% of the global tanker fleet. It’s also reliant on Europe for reinsurance.

–With assistance from Patrick Sykes.