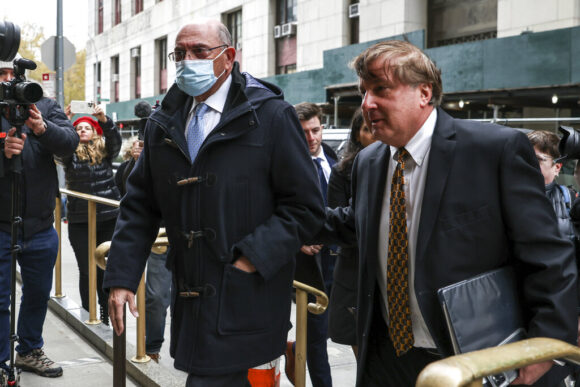 Donald Trump’s jail-bound longtime finance chief is still a company man, collecting a hefty salary from the former president’s namesake Trump Organization even as he makes his long-awaited turn as the prosecution’s star witness in a criminal tax fraud trial in New York.

Allen Weisselberg testified Tuesday that until recently he was working as a senior adviser for the company — out as CFO following his arrest last year, but with no loss in pay — and is now on a paid leave of absence after pleading guilty in August to evading taxes on $1.7 million in company-paid perks.

Weisselberg, who’s still collecting his usual $640,000 salary and $500,000 in annual bonuses, said he even celebrated his 75th birthday at Trump Tower with cake and colleagues just hours after finalizing the plea agreement, which now pits him against the company where he’s worked since the mid-1980s.

Asked if he was in line for another bonus this year, Weisselberg offered a seemingly nervous grin and said: “I don’t know yet. … Hopefully.”

Despite his financial entanglements, Weisselberg has good reason to cooperate fully with the plea deal requiring him to testify against the Trump Organization. Prosecutors could void his promised five-month jail sentence and seek the maximum sentence of 15 years in prison if he doesn’t fully comply.

The Trump Organization — the entity through which the former president manages his real estate holdings, marketing deals and other ventures — is accused of helping some top executives, including Weisselberg, avoid paying income taxes on compensation they got in addition to their salaries for more than a decade.

Prosecutors argue that the Trump Organization, through its subsidiaries Trump Corp. and Trump Payroll Corp., is liable for Weisselberg’s scheme because he was a “high managerial agent” entrusted to act on behalf of the company and its various entities.

The Trump Organization denies wrongdoing. While the company has continued to employ Weisselberg and pay him handsomely, its lawyers have been ganging up on him in court.

They allege that Weisselberg came up with the tax dodge scheme on his own without Trump or the Trump family knowing, and that the company didn’t benefit from his actions. If convicted, the company could be fined more than $1 million.

But Weisselberg, reiterating his own guilt on the witness stand, testified that his scheming did benefit the Trump Organization’s bottom line in addition to his own.

Weisselberg said he saved the company hundreds of thousands of dollars by reducing his salary by the total cost of the fringe benefits — including a Manhattan apartment with a terrace overlooking the Hudson River, plus Mercedes-Benz cars for him and his wife — rather than asking for a raise and paying for them out of his pocket.

Weisselberg, who first started working for Trump’s father in 1973, has intimate knowledge of the company’s financial dealings and could end up testifying for several days. But he is not expected to implicate Trump or any members of the family in his testimony. Weisselberg is free on bail and will be formally sentenced following his testimony.

Weisselberg described Trump as a hands-on leader who, prior to leaving for the White House in 2017, received weekly reports detailing the company’s finances and personally signed off on all big expenditures. Weisselberg said he saw Trump on a daily basis in those pre-presidency days but hasn’t talked to him much since his 2020 election loss.

Weisselberg testified that it was Trump’s idea for him to move into a company-paid Manhattan apartment after his wife fell ill in 2005. Weisselberg said Trump told him being closer to the office would enable him to keep working 10- to 12-hour days without the burden of a three-hour roundtrip commute to his home on Long Island.

Trump signed the lease for Weisselberg’s apartment and authorized him and his wife to receive Mercedes-Benz cars, the leases for which were paid by the Trump Organization. Weisselberg said he hid his scheming from the company’s accountant, who also prepared his personal tax returns. He did not give any indication that Trump was aware he was maneuvering to avoid taxes.

Trump Organization lawyers spent part of Monday and Tuesday’s court sessions attempting to counter Weisselberg’s testimony, using their cross-examination of the prosecution’s first two witnesses to underscore their assertion that others at the company, including Trump, knew nothing about the scheme.

Jeffrey McConney, the company’s senior vice president and controller, and Deborah Tarasoff, the accounts payable supervisor, both of whom worked under Weisselberg, told jurors they were just following orders. Tarasoff agreed with a defense lawyer’s description of Weisselberg as an exacting, authoritarian micromanager who enjoyed immense trust within the company.

Tarasoff said she prepared company checks for Weisselberg to pay his apartment rent and car lease payments and cut checks from Trump’s private account to pay tuition for private schooling for Weisselberg’s grandchildren.

Tarasoff said that in September 2016, as the presidential vote that catapulted Trump to the presidency neared, Weisselberg ordered her to start deleting notations about some of the transactions in the company’s bookkeeping system. Tarasoff said she didn’t think Weisselberg was asking her to do anything illegal.

But even if he had, she said: “I guess I would because he’s the boss and he told me to do it.”