Treasury sides with insurers to free up billions in capital Jeremy Hunt has overruled the Bank of England on a key part of insurance reforms intended to unlock tens of billions of pounds of investment into the real economy.

In a range of measures in the Autumn Statement intended to boost the UK’s financial sector, the chancellor made a long-awaited decision on revising the so-called Solvency II regime, which governs how insurers are run, including how much capital they must hold and where they can invest.

Speaking to MPs, Hunt invoked the Big Bang, a sweeping financial deregulation in the 1980s under his predecessor Nigel Lawson, saying: “We must stay true to its mission to make the UK the world’s most innovative and competitive global financial centre.”

He also slashed a tax surcharge on bank profits — costing the Exchequer an estimated £1.4bn a year — a move aimed at preserving the attractiveness of the City of London after the turmoil of Brexit. A cap on bankers’ bonuses will also be removed, as announced in September’s “mini” Budget.

The changes to Solvency II, which the UK inherited from the EU, have been hailed by the government as a potential “Brexit dividend”, though Brussels is also looking to adjust the regime.

In a consultation response issued alongside the Autumn Statement, the government confirmed it would cut the risk margin, an extra capital buffer that companies must hold, by 65 per cent for life insurers and 30 per cent for general insurers.

It also decided against tightening the rules regarding the so-called matching adjustment, which offers a capital benefit to life insurers that invest in assets that match their long-term liabilities.

The Association of British Insurers, a trade body, “strongly” welcomed the changes and said they opened the way to more than £100bn of investment into the real economy, including new areas such as green energy. Amanda Blanc, Aviva chief executive, said the change would deliver a “welcome boost for UK investment”.

The Bank of England’s Prudential Regulation Authority (PRA), which regulates the sector, had previously pushed for changes to the matching adjustment to better reflect credit risks to which insurers are exposed. But the government decided to leave this area largely unchanged, and instead to give the regulator extra tools to monitor the safety of companies, including through stress tests.

“Although the government has decided not to take forward the PRA’s proposals for reform of the fundamental spread, the government recognises the importance of policyholder protection,” said the Treasury.

It added that it will broaden the eligibility of assets that insurers can use to match their liabilities “to allow the inclusion of assets with highly predictable cash flows”.

The Bank of England said: “The PRA supports the government’s goal of promoting growth and productive investment, and has a primary duty to protect insurance policyholders.” The “key decisions will now be for parliament”, it added.

L&G chief executive Sir Nigel Wilson welcomed what he called a “collaborative solution” after months of talks between the government, regulator and industry.

Separately, Hunt cut a tax on banks’ profits by more than 60 per cent, reversing the plans of his predecessor Kwasi Kwarteng, to the relief of lenders who feared they would be one of the sectors raided to help raise public funds.

The chancellor announced that an 8 per cent surcharge on bank profits will be cut to 3 per cent from April. He also increased the threshold at which the tax comes into force from £25mn to £100mn, protecting the earnings of smaller challenger banks. 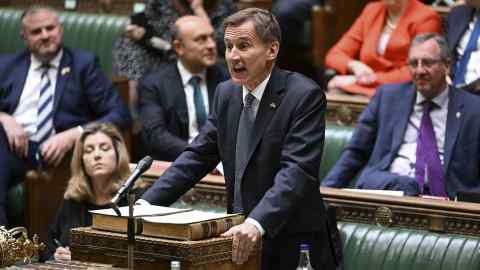 The move “suggests the government has prioritised the international competitiveness of the UK financial sector over ‘easy’ tax raising measures”, said Jonathan Pierce, an analyst at Numis, who estimated that the cut represents a “not immaterial” £1.4bn a year.

UK Finance, the lobby group representing banks, said the reduction “recognises the importance of maintaining the international competitiveness of the banking and finance sector”.