Taiwan’s financial institutions reduced their China exposure to a record low amid economic and political uncertainties, according to its top financial regulator.

Total exposure to China at Taiwanese banks, insurers and securities firms have dropped by 20% from a year earlier to about NT$1.35 trillion ($43.3 billion) at the end of September, according to Taiwan’s Financial Supervisory Commission.

Taiwan’s government has long urged its businesses to diversify away from the world’s second largest economy. In October, the island’s Finance Minister told Bloomberg News that the export-reliant economy will not “put all our eggs in one basket” and need to work more closely with other trade partners. 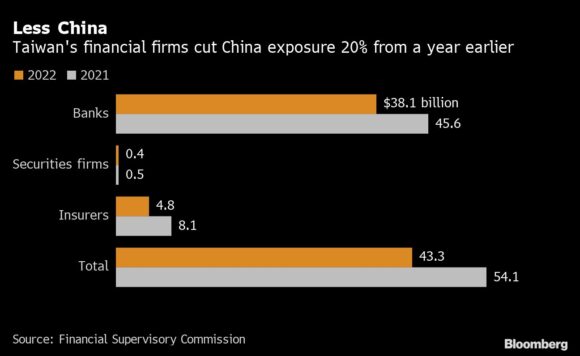 Insurers cut over 40% of their China investments to manage risks, according to the FSC. Part of the adjustments were due to the decline of valuations, the FSC said. China’s benchmark Shanghai Composite Index has declined 15% this year.