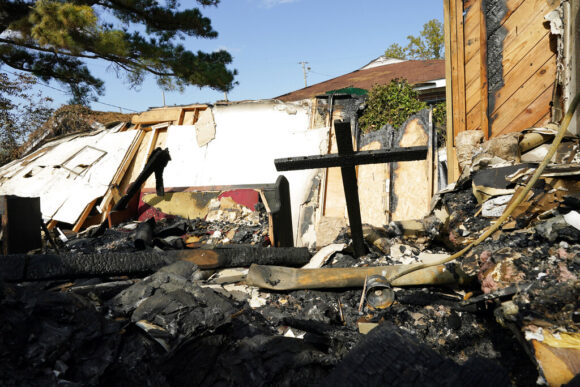 At least two of the buildings set ablaze in Jackson were churches; one was burned to the ground. Another fire broke out on fences surrounding the baseball practice field at Jackson State University, a historically Black public university. No injuries were reported.

“I’ve been here for 30 years. This is a major occurrence,” Patrick Armon, assistant fire chief for the Jackson Fire Department, told WAPT-TV. “This is not something we normally go to. We have about a third of our department on sites.”

After a search that lasted several hours, the Hinds County Sheriff’s Office announced Tuesday afternoon that they had arrested Devin McLaurin in connection with the arsons. They did not provide any information about McLaurin’s motivation. A spokesperson for the Jackson Police Department said he is being charged with felony malicious mischief. He is being questioned by Federal Bureau of Investigation agents and may face additional charges.

It was unclear whether McLaurin had an attorney who could comment on his behalf.

Officials started to receive calls about several fires starting around 2:45 a.m. Officials said six of the seven fires were put out by 6 a.m. Epiphany Lutheran Church, one of the oldest predominately Black Lutheran churches in Mississippi, burned for more than four hours before the fire was extinguished.

Lloyd Caston, 73, an elder at Epiphany, was awoken around 4 a.m. by a call from a family member who lives in the church’s neighborhood. Alerted to the fire, he left his home and arrived at the church around 4:30 a.m. to find the building “fully enflamed.”

“I was hurt,” Caston said as he thought back to seeing the church on fire.

The fire department was on the scene attempting to put out the fire when Caston arrived. He stayed about an hour and left before the fire was extinguished. “There wasn’t nothing we could do but sit and watch,” Caston said. “That was it.”

“It destroyed the church and everything in it,” Caston said. The church is 85 years old, and renovations to the building’s interior had just been completed in March.

“We don’t yet know who or why, but I want to thank the firefighters because they were able to respond to that and still get back to the stations, so that people could set up for voting precincts,” Lumumba stated.

With an election Tuesday morning, no polling places were reported to have been impacted by the fires.

Top Photo: Melted siding, burned insulation, charred wooden beams and ashes of old hymnals and bulletins are all that remain at Epiphany Lutheran Church near midtown Jackson, Miss., Tuesday, Nov. 8, 2022. Authorities in Mississippi’s capital city are on the hunt for a suspected arsonist who set several fires early Tuesday morning on and near the campus of Jackson State University, a historically Black public university. At least two of the buildings set ablaze were churches. (AP Photo/Rogelio V. Solis)