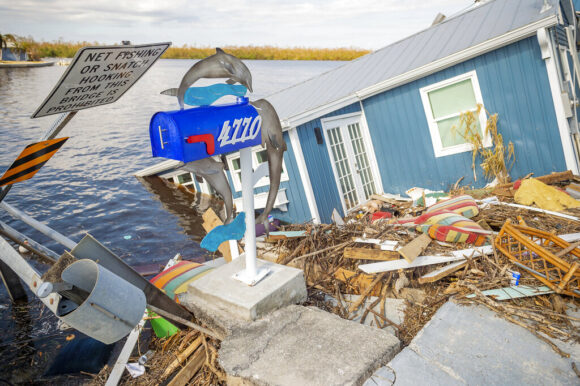 For Sara Lee Brinks, Ian was the first hurricane she’s ever experienced.

Originally from Michigan, the owner of Pine Island’s Frozen Flip Flop said that at first, she wasn’t worried about Ian, but it proved to be unlike anything she’s ever been through.

After checking in on her shop, Brinks is now working towards getting herself, and her community, back to normal.

Like Brinks, several Pine Island residents, businesses and officials are on a mission back to normalcy, aiming to rebuild better a little more than a month after the storm.

Pine Island suffered immense damage from the Category 4 storm, ripping up trees, telephone poles and roofs, as well as demolishing homes and businesses.

From Bokeelia to St. James City, inhabitants of the 17-mile-long unincorporated island have worked tirelessly in the weeks since Sept. 28 to clear debris from their properties and begin restoration efforts. The island has restored power and water.

While Ian’s 155 mph winds and nearly 12-foot storm surge tore through and left physical scars on the area, there was no damage to the island’s sense of community and spirit. From delivering meals to first responders to planning events to raise funds for those in need, Pine Islanders have stepped up to help one another on the road to recovery.

Progress after one month-plus

For Pine Island Chamber of Commerce Board member Cynthia Welch, the recovery process has been “ongoing but incredible to watch.”

“Just from the initial clearing of our roads before we even have had a bridge, our islanders were doing all that so that by the time we did get our road back, (Lee County Electric Cooperative) and their cohorts that they brought out could actually get out here and get started,” Welch said. “That was a huge step in the right direction right from the get-go. A lot of people kind of forget that . our roads were clear before we ever had any help from anybody outside.”

After Ian’s hit, Welch describes the devastation as mind-blowing, saying it was hard to look at initially. However, she applauds the strength of the community for banding together.

Now just over a month later, it is their strength that has allowed Pine Island to recover as quickly as it has.

“Most of our businesses are back open in some level or another and are functioning,” Welch said, with more than half of their over 200 members back and running. “People are going about their daily lives and cleaning up and picking up and getting their roofs fixed and their siding and all the other stuff. It’s incredible in just a month to see the difference.”

Through all of the tragedy and destruction, Welch said there has been no shortage of neighbors helping neighbors and terrific people coming out to support the community.

“From the linemen that come from God knows where to the volunteers who that have come out to help, the people who have donated stuff to help those who have lost everything . the hot meals were a godsend for everybody when you’re trying to do everything else,” Welch said. “All that stuff just restores your faith that good people are out there and then when push comes to shove, people band together to help each other out.”

Businesses reopen, give back after Ian

Brink had just opened her frozen yogurt shop, located along the middle of Stringfellow Road, in July of this year.

She said she joined the Pine Island community permanently in 2020, opening her shop two years later after polling locals to see what they wanted.

“During high season, we can’t get off island, that road is just all jammed up. The only two answers I got was coffee and ice cream,” Brink said. “In thinking that type 2 diabetes is rampant around here, I thought that frozen yogurt is lower in fat and sugar, so I thought frozen yogurt would be a good idea.”

When she learned about Ian’s impending path towards Southwest Florida, she said she honestly wasn’t nervous at all. She did pack a bag to head back to her native Michigan, yet decided to stay after hearing reassurance from neighbors and customers.

“When (neighbors) invited me down there (to shelter), it felt very safe until the surge and then we made a run for it to the neighboring stilt house in the surge,” Brinks said. “And then I got sick because of the floodwaters. I remember shivering it was so cold that night. When we came back through the floodwaters to the original house we all got sick.”

Coming out the next day and seeing the damage to her newly found community was “heartbreaking.” Fortunately, her yogurt shop received little to no damage.

Over three weeks, she only reopened for one day, giving out ice cream to first responders and residents. Now, she’s fully back open again.

His restaurant, opened this past January, experienced some roof and floor damage, as well as some of their ventilation system being blown off the roof. His food truck was also moved ten feet away from where it’s normally parked on their lot.

Yet, Crowley said he feels fortunate compared to his neighbors.

“I was kind of happy that it was in the condition it was in because we came by boat first, because there was no road, the first thing we saw were the houses and our community down in St. James City . it was just mangled,” Crowley said. “So many people lost so much. There’s people that lost literally everything. Those are the people that we’re trying to help out.”

Working out of the food truck after it was repositioned, Crowley was back to serving meals to the community on Nov. 2.

The Fine Swine even held a hurricane benefit concert to rebuild Pine Island in the parking lot of his restaurant Oct. 16. He estimates he has served over 1,200 meals to residents and first responders.

Beyond the heart of Pine Island, other parts of the island were completely decimated by Ian.

On the southern tip, the famous fishing town of St. James City is normally home to several eclectic restaurants, shops, and art galleries.

As of now, a tragic mix of debris and dirt lines Stringfellow Road and the town’s surrounding streets, as if a bomb went off within the middle of the city.

The Low Key Tiki was one of the storms victims. Beloved by not just the Pine Island community but by those all over the world, the restaurant has captured the hearts of patrons for decades.

Following Ian, the restaurant suffered damage from three feet of flooding, losing all of the equipment in their main kitchen.

Despite the damage, owner Johnnie Smith said he and his staff reopened soon after and were serving meals to residents since “day one” after the storm hit.

The Low Key Tiki is currently in the process of being rethatched, expecting to close starting Nov. 8 for the repairs.

“Stronger than the surge”

The road to recovery is a long one for Pine Island, yet is being made faster by the dedication of locals.

For residents who have experienced the unimageable over the past month, Brinks said they’ve appreciated the hint of normalcy.

“Everybody is so supportive. People come in here and when they walk in, they say, `Oh my gosh, we needed this, it feels like nothing ever happened,”’ Brinks said. “Or they’ll come in and cry. All they need are hugs or they’ll come in and just sit and vent. And then they will thank me for letting them vent because they just have to get it out.”

Brinks and Crowley are continuing to provide aid and join in on events to help recovery efforts. Brinks said she is preparing her shop to start serving hot breakfast for residents, while Crowley plans to serve meals at a Pine Island benefit in the works for Nov. 19.

As for the chamber, Wells said their next steps are collecting responses from their correspondence to all their members, noting when businesses expect to be open. While some businesses are already reopen, they expect others, specifically in St. James City and Matlacha, to take awhile before opening their doors.

From there, they will plan to do local ad campaign in the coming months to encourage locals to do day trips to the island. As of now, they aren’t exactly recommending traveling.

“We’re not discouraging anyone from coming out right now, but neither are we really encouraging everybody because we’ve still got a lot of work to do,” Welch said.

Welch does encourage the slogan of “Stronger than the Surge,” promoting the positive spirit of the islanders.

“There’s so many heartbreaking stories of people who have lost everything . their homes and their businesses, then you talk to them, and they have such a positive attitude about rebuilding and moving forward,” Welch said “So I think it’s the attitude of everybody (that sticks with me).”

This article originally appeared in the Fort Myers News-Press.