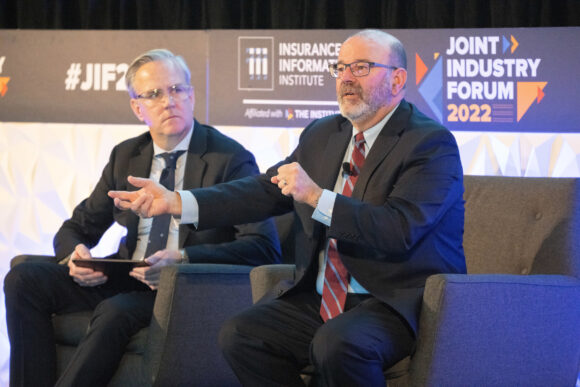 State Farm CEO Michael Tipsord said the nation’s top property/casualty insurer will likely never be the same following the pandemic – and that may be a good thing.

“I don’t think we’ll ever go back to March 11,” said Tipsord, referring to the day before State Farm sent employees home on March 12, 2020. Tipsord was a guest at the Insurance Information Institute’s Joint Industry Forum in New York earlier this month.

“We’re still dealing with the notion of bringing our workforce back into the building,” he said. The pandemic forced State Farm to reevaluate benefits, pay, location, and hours (though it issued no lay-offs or furloughs), he added, and the company – listening to its leaders within an established learning environment – is waiting for answers to emerge.

Tipsord acknowledged the mutual insurer’s workforce won’t look like it does today either, and he said he thinks there are some long-term consequences to employees. He admitted State Farm has drafted multiple plans to bring employees back but the company has realized “the power of virtual capabilities in terms of interactions, that were forced upon us at the depths of the lockdown.”

As the new work-from-home culture developed and problems were ironed out, State Farm was “growing at levels we had never grown in our history,” Tipsord said. “We were serving more people than we had ever served in our history. So there was no business case to say, ‘You have to bring everybody back in.’ We’re better now.”

In making the early choice to transform State Farm from a 90% in-office workforce to nearly 0% overnight, the insurer treated the situation as it would a catastrophe – even bringing in it’s natural catastrophe lead, Tipsord said, adding that he remembered someone mentioning they had made one of the most difficult decisions in State Farm’s history when it sent employees to work from home but even then he said he knew, “The hardest decision was going to be to bring them back.”

A Bad Miss in Auto

Other than the impact on its employees, State Farm quickly realized the pandemic would have a “profound change in the behavior of all our customers,” especially in auto insurance since so many people weren’t driving.

State Farm in 2019 had priced its auto insurance products but, of course, it did not expect the dramatic drop in risk – and had no idea how long it was going to last.

“We focused on returning value to customers,” Tipsord said. As a mutual, the prospect was not a novel idea but in the past dividends were doled out based on experience, not on a prospective basis. Complicating matters more were moratoriums on cancellations due to non-payment. The insurers was concerned it would be “returning premium for premium never paid.”

Tipsord said State Farm chose to issues a total of about $2 billion in dividends, “categorized as a credit against future premium.”

Recognizing customers could feel the sting of unemployment during the pandemic, the insurer furthermore decided to take an average 11% rate reduction – about $4.5 billion, nationally – “with a gameplan to bring it back over time.”

Tipsord said the analytics “got the frequency picks right” but the insurer “missed severity badly.”

“We did not anticipate the inflationary pressures,” he said, and the did not fully appreciate the effect of the lockdown on the court system.

The consequence for calendar-year 2022 is the “largest auto underwriting loss in the 100-year history of our company,” Tipsord said, adding that he was not going to detail State Farm’s plan moving forward except to share that the insurer is “built to withstand this volatility.”

Importance of the Contract

Tipsord’s thoughts on the value of the insurance contract were also highlighted in relation to the pandemic and natural catastrophes, namely hurricane. Each cause some policyholders or regulators to seek coverage outside of policy terms. For instance, disputes arose regarding pandemic-related business interruption and, following named storms, language on hurricane deductibles typically finds the spotlight.

A self-proclaimed free-market believer, Tipsord said confidence in commerce is driven by the contract and its terms must be enforced as agreed without retroactive distortion. Even short-term deviations can have “detrimental consequences,” he said.

“What happens is a reduction of the promise fund available to deliver for all customers, across all products,” Tipsord said. “It’s about ensuring the continuous flow of commerce.”