The attacks that left two electrical substations in North Carolina riddled with gunfire and knocked out power to 45,000 homes and businesses underscores the fragility of US grids, experts said Monday.

The FBI is investigating the assault that extensively damaged the two facilities, about 10 miles (16 kilometers) apart in a largely rural area of the state east of Charlotte. Authorities realized the equipment had been hit around 7 p.m. Saturday [Dec. 3] after outages began spreading across the region, officials said.

“From this incident, it appears that the electrical grid continues to be extremely vulnerable,” said Jon Wellinghoff, chief executive officer of GridPolicy Consulting Inc. and former chairman of the Federal Energy Regulator Commission.

While power grids are regular targets of cyber attacks, major physical assaults on the systems are rare. The incident in North Carolina underscores how when successful, such strikes can have widespread consequences. Duke Energy Corp., which owns the equipment, warned some customers could be without power for days.

“The damage is beyond repair in some areas,” Jason Hollifield, a general manager for Duke Energy, said in a statement. “That leaves us with no option but to replace large pieces of equipment.” 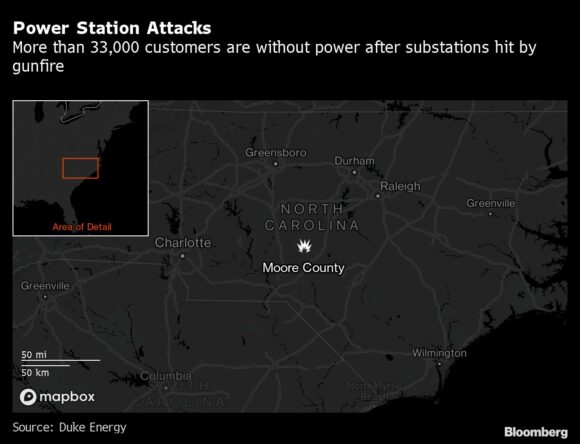 About 38,000 homes and businesses in the area remained without power Monday afternoon, Duke said in its statement, as evening temperature were forecast to dip to 44 degrees Fahrenheit (6.6 degrees Celsius). More than 60% of North Carolina households depend on electricity for heat, according to US Energy Information Administration.

Earlier in the day, Duke online outage map showed a lower number of customers without power. Duke said services may not be completely restored until Thursday.

The Moore County sheriff, Ronnie Fields, said the attack was not random.

“It was targeted,” Fields said. “I call them cowards.” A county-wide 9 p.m. curfew was implemented to protect citizens and businesses.

The Biden administration is watching the North Carolina investigation and monitoring the situation closely, National Security Council spokesman John Kirby said Monday. “I think the President would be the first to admit that there’s a lot of work left to be done when it comes to infrastructure security,” he said. 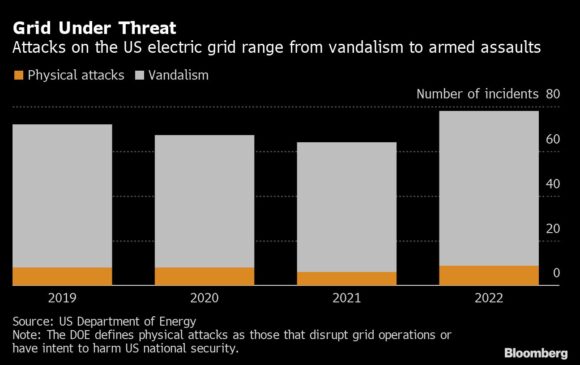 There have been nine physical attacks on the US electrical grid so far this year, along with 60 acts of vandalism, according to the Department of Energy data. The agency, which reported slightly lower numbers for the previous three years, defines physical attacks as those that disrupt grid operations or have intent to harm US national security.

In February, three men pleaded guilty to planning to attack substations in different US regions to incite civil unrest. In 2016, about 13,000 customers lost power when gunfire damaged a Utah substation. And a California substation was damaged by gunfire in 2013, forcing the state grid operator to call for conservation in the area.

There are several reforms that would protect the grid, said M. Granger Morgan, an engineering professor at Carnegie Mellon University. First, install walls or visual barriers so gunmen can’t aim directly at transformers and circuit breakers. And second, create a coherent national strategy to protect the grid instead of leaving the task to state regulators.

“We have substations sitting out in the open all across the country,” said Morgan. “We’re still very vulnerable.”

–With assistance from Ari Natter, Will Wade, Justin Sink and Naureen S. Malik.