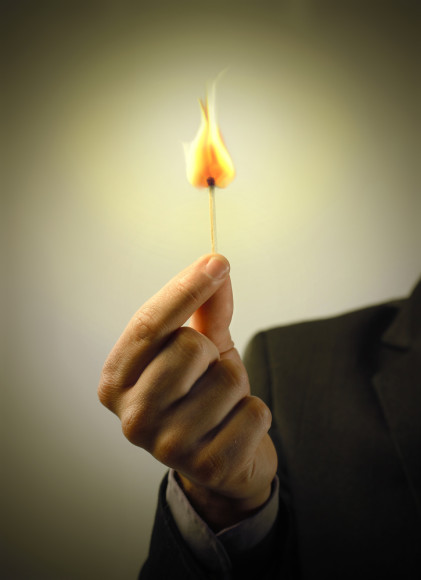 A Colorado dentist accused of setting a fire that damaged a transformer at a solar power array outside Las Vegas last week told investigators he wanted to send a message supporting clean energy and denied his intention was sabotage, police said in an arrest report obtained Wednesday.

“I burned it,” Mohammed Reza Mesmarian told police detectives during questioning following his arrest Jan. 5 at a trailer home parked at a campsite near Lake Mead, the Colorado River reservoir outside Las Vegas.

“Mesmarian admitted he knew setting a vehicle on fire could cause damage to the (transformer) unit, but stated he did it for the big message, larger picture, greater good,” his arrest report said. “He explained the greater good was clean energy.”

Mesmarian, 34, remains jailed without bail pending mental health evaluations and a court hearing Feb. 1. If he is found fit for trial, he could face felony terrorism, arson and other charges that could get him decades in state prison.

Mesmarian told police he had been in Las Vegas for several days during the New Year holiday, thought the solar farm about 25 miles northeast of Las Vegas was a Tesla facility, and he believed the transformer was connected to “the network.”

The solar array provides electricity by contract with several Las Vegas Strip properties operated by MGM Resorts International. When Invenergy shut it down, the casino company switched to the statewide electric grid. An MGM Resorts official said there was no effect at Strip properties.

Mesmarian told police he was born in Iran. His attorney, Nick Pitaro, said Wednesday his client is a U.S. citizen and a college graduate. His first name is spelled Mohammad in public records in Colorado. His online professional profile said he attended the University of Colorado Anschutz Medical Campus.

Mesmarian’s arrest in Nevada followed several attacks and arrests involving electrical substations in states including Washington, Oregon and North Carolina, and an order by federal regulators for a review of security standards at the nation’s electricity transmission network.

Allegations against Mesmarian bear similarities to a Utah case involving a man arrested in 2016 and later sentenced to federal prison for using a rifle to damage an electric substation, causing a power outage in rural Kane and Garfield counties.

The man, Stephen Plato McRae, spent several months before his arrest targeting power facilities in remote parts of Utah and Nevada as part of what he described as a “master plan” to shut down power in the West, according to court documents.

McRae told an informant that he was “stopping global warming,” and he railed against fossil fuels. The court papers said he was planning another act of sabotage, “the grandmomma” as he described it, to disable a larger power substation in Nevada.

In Mesmarian’s case, Las Vegas police found an iPhone linked to Mesmarian and laptop computers in a burned Toyota Camry registered to his mother, who lives in Idaho.

Mesmarian was seen on security video positioning the car, rigging it to burn, and sitting and watching the fire for about 15 minutes before walking away, according to his arrest report. Mesmarian told police he “felt peace” and had no regrets.

No employees were at the sprawling facility at the time. Damage was discovered after they arrived the following morning.

Mesmarian also faces escape charges after police said he tried twice to slip the grasp of arresting officers. He later told police “he wanted to experience the feeling of what Black Lives Matter protesters felt when they were tazed by police.” Police did not report using a stun gun on Mesmarian.

Records show that Mesmarian’s dentist license is active but was restricted last July by the Colorado Dental Board, and that Mesmarian filed Chapter 7 bankruptcy last Oct. 5.

U.S. Bankruptcy Court records show he claimed $1.4 million in liabilities, mostly business debts related to equipment leases, but also a student loan debt of about $20,000. He claimed $17,601 in personal assets.

Dental Board discipline stemmed from a complaint about “potential unsanitary conditions including improper disposal of infectious waste and uncapped syringes” at Mesmarian’s practice, dating to October 2021.

The board called for Mesmarian to complete continuing education courses over the course of 12 months. A Colorado Department of Regulatory Agencies official said Wednesday it was not clear if he had done so. The attorney who represented Mesmarian in the case said he no longer represents him.

An attorney who represented Mesmarian in the bankruptcy case did not immediately respond to messages from The Associated Press.