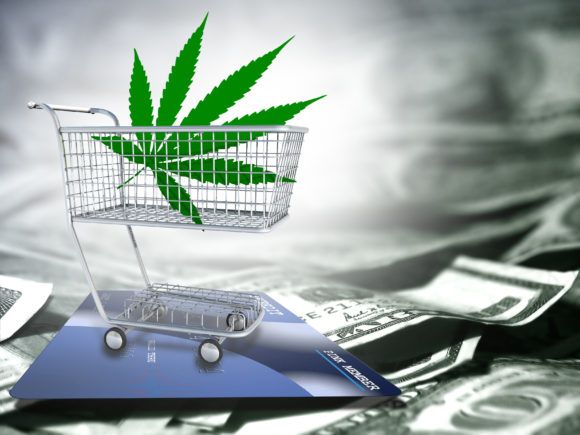 New York has approved its first 36 retail marijuana dispensary licenses, awarding them to 28 applicants with prior cannabis convictions and eight nonprofits that serve those formerly incarcerated.

New York officials wanted the state’s first legal adult-use retail dispensaries to be operated by those the state said have been most impacted by the enforcement of the previous prohibition on cannabis. To be eligible for the new Conditional Adult-Use Retail Dispensary (CAURD) licenses, individual applicants were required to either have had a cannabis conviction themselves — or be a family member of someone who has — and have owned a profitable business.

The state legalized recreational use of marijuana for those 21 years and older and expunged the records of most marijuana convictions in March 2021.

New York Deals With Illegal Pot Shops
While marijuana licensing by the Cannabis Control Board is just getting started in New York, there are already quite a few unauthorized pot shops openly selling marijuana.
The Office of Cannabis Management (OCM) has sent cease and desist orders to 52 illicit cannabis storefronts it says falsely depict their operations as legal cannabis dispensaries, but they are not licensed by the state and are selling untested products that could be unsafe.
Additionally, the OCM has received referrals of additional illicit storefronts from local police and the general public that are under review.
The OCM said it is notifying these operators that their failure to cease operations could permanently bar them from receiving any cannabis licenses in the state.
“These stores are masquerading as licensed, regulated businesses, but they are nothing of the sort. They aren’t creating opportunity, they are creating confusion – New Yorkers think they’re buying a high-quality, tested product when they aren’t,” said Chris Alexander, OCM executive director.
Currently, the only legal means of procuring cannabis products is through the medical cannabis program, which requires getting certified from a medical provider.
The Associated Press reported that one storefront, Empire Cannabis Club, already has a location in Brooklyn and two in Manhattan. Proprietor Jonathan Elfand told The Associated Press his year-old club sells marijuana products to members who pay daily or monthly fees. He says his club is legal but the state disagrees.
The New York State Liquor Authority last week suspended the license of a Long Beach convenience store, Seabreeze Grocery, which the agency said has been under investigation since May 2022 involving alleged illicit cannabis sales from behind the counter.

In conjunction with the Cannabis Control Board’s announcement of the first licensees, the state’s insurance regulator advised insurance underwriters they cannot use prior marijuana convictions in underwriting life, accident and health, or property/casualty insurance. The Department of Financial Services issued a letter explaining that the state’s new marijuana laws mean it is unlawful to inquire about or underwrite adversely based upon an arrest or conviction of a cannabis-related crime:

“Issuers may not deny an application for insurance, make a distinction in premiums or rates, make a distinction in the terms and conditions of insurance, or otherwise adversely underwrite based on any such arrest or conviction. Issuers must review their procedures and controls and update them, as needed, to ensure that they do not inquire about or act adversely based upon any such arrests or convictions, including newly expunged cannabis-related convictions.”

These dispensaries will be making the first legal adult-use sales with cannabis products grown by New York farmers. At least one CAURD license was granted in each region of the state.

The Office of Cannabis Management said it received more than 900 applications for the CAURD licenses. Eventually, the state plans to grant up to 175 licenses in total with 150 to individual applicants and 25 to nonprofit applicants.

“Today marks another huge win for so many advocates who fought for years to end cannabis prohibition in New York State. Last year we ended prohibition, and now we’re making sure those harmed by prohibition are launching New York’s market,” said Office of Cannabis Management Executive Director Chris Alexander. “Now we’ll keep our foot on the pedal and do all that we can to ensure that these businesses and those that follow are successful.”

The Cannabis Control Board also proposed a set of regulations that adult-use cannabis shops must follow. The board said the regulations reflect cannabis public health best practices, including rules for keeping cannabis products out of the hands of youth, establishing product quality and safety guidelines, outlining employee training standards, and defining business security requirements to protect public safety. The proposed regulations are subject to a 60-day public comment period.

The cannabis board also approved an additional 16 cultivator licenses, growing the total number to 277; eight processor licenses, raising that total to 33; and three laboratory permits, bringing the total to seven. The three newly-licensed labs are Biotrax Testing Laboratory in Erie County; Kaycha NY in Albany County, and Keystone State Testing in Broome County.

New York’s cannabis law established a two-tiered market structure similar to that of the alcohol industry, which separates supply (cultivation, processing, distribution) from retail. The regulations include prohibitions on individuals having an interest in businesses across tiers.