Insurers are girding themselves for a tricky relationship with the Bank of England following the UK government’s Edinburgh financial reforms, with some privately warning that new regulatory powers could limit their ability to boost badly needed investment in the real economy.

The BoE’s Prudential Regulation Authority, which supervises the insurance industry, failed in its attempt to secure a more conservative approach to an overhaul of the rules governing the sector announced last year.

But some industry figures warn that new powers the regulator has been granted as part of the reform package could still allow it to go “through the backdoor” and force firms to be more cautious.

The government’s plan to overhaul EU-inherited insurance rules, the so-called Solvency II regime, was unveiled in the Autumn Statement and followed months of fraught negotiations between the regulator and the industry.

The Treasury has repeatedly described the changes, which include slashing the amount of capital insurers must hold as an extra buffer against shocks, as a “Brexit dividend” that would unlock £100bn of investment into areas such as infrastructure.

But it decided not to push through a change lobbied for by the PRA that would have made a key part of these companies’ solvency calculations, known as the fundamental spread, more sensitive to credit risks.

Insurers had warned this would drive up capital requirements for life insurers, running counter to the government’s goal for the reform.

Instead, the Treasury handed the regulator a new suite of tools to beef up the oversight of firms, including fresh responsibilities for senior managers to sign off on key calculations, saying it supported “the PRA’s use of these measures to hold insurers to account in maintaining safety and soundness and policyholder protection”.

Some insurers worry these requirements could push firms down the more risk-averse route that the regulator had been advocating, effectively limiting any capital release that could support extra investment.

“We [have avoided] a change in the fundamental spread. What we don’t want to do is to see that undermined,” said one policy expert at an insurer, speaking on condition of anonymity. “Let’s not have it done through the back door.”

Despite their public disagreement over the fundamental spread — a senior government official at one point accused the PRA of being a “dog in the manger” over the reform — the two sides have presented a united front on the reforms since they were announced.

Under the new rules the BoE will be able to publish stress tests with individual firm results for the first time for the insurance sector — as it already does for banks. 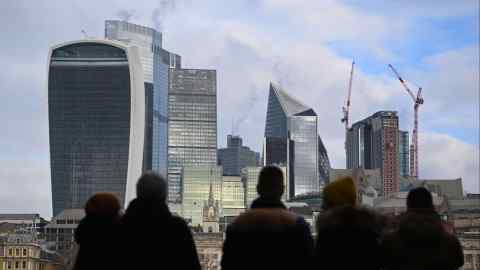 There will also be a new attestation power for senior managers to state formally that the calculation of the fundamental spread — an assessment of credit risk that feeds into the measurement of insurers’ liabilities — is appropriate. This is the part of the regime that the PRA had pushed to toughen up.

If senior management are not happy that this fundamental spread “is sufficient to reflect all retained risks”, as the government put it, they will be able to discuss a capital add-on with the regulator.

Executives are hungry for further details on precisely what they should be taking into account in those key decisions. One insurance executive warned that the government’s hoped-for investment boost could be hard to deliver if the regulator takes a stringent approach to its new powers. Others in the sector argue that firms will now have the opportunity to fight their corner on how they judge risks.

Further detail on the Solvency II package is expected from the Treasury and the PRA, but a date for its implementation has yet to be announced.

But an early glimpse of the new relationship between regulator and the industry could come in February, when PRA chief executive Sam Woods is due to speak at the ABI’s annual dinner, according to people familiar with the matter.

Andrew Griffith, the City minister, brushed aside concerns the PRA’s new regulatory powers would undermine the benefits of overhauling Solvency II reforms, telling the Financial Times there is a “shared goal to move forward to unleash that £100bn benefit into all parts of the UK [through] new forms of assets like renewable energy”.

Some in the sector privately wonder whether the focus on unlocking capital from the sector will be shortlived. “The PRA is there in perpetuity and the government’s attention is only limited,” said one insurance executive. “What happens after the government looks away?”

The PRA declined a request to comment, but said in November it would “faithfully” implement the legislative changes.

“The potential behind the reforms to the Solvency II regime is vast. We all want the same thing,” said David Otudeko, the Association of British Insurers’ head of prudential regulation, adding that all sides shared an ambition to boost productive investment and support initiatives such as levelling-up.

“We’ll continue to work with government, industry and regulators to make sure the changes are implemented in a way that works for everyone.”