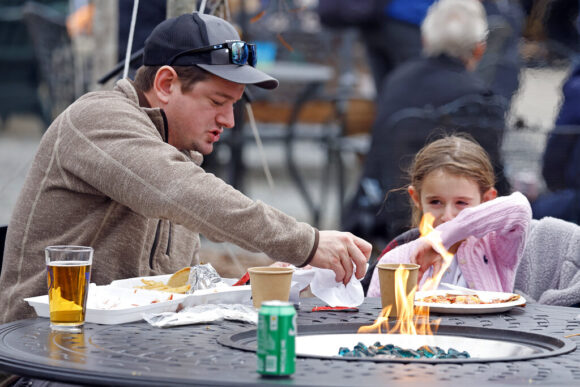 “This criminal act has had a significant impact on nearly 45,000 residents,” Commissioner Mike Causey said in a statement. “Many folks cannot access their online insurance accounts due to power loss. We are requesting that insurance companies be flexible with customers during this time until power is fully restored.”

Homes and businesses across Moore County lost power Saturday night after perpetrators shot up the electrical stations, shutting them down for days. many businesses and restaurants displayed “Closed” signs in windows and had empty parking lots at a time of year when they are normally full of tourists and holiday shoppers. Others handed out free food or coffee, or were able to open by conducting transactions in cash.

The county, located about 60 miles southwest of the state capital of Raleigh, announced schools would be closed Tuesday for a second day.

Duke Energy has restored power to roughly 9,000 customers after a peak of about 45,000 customers were without electricity in the county of about 100,000 inhabitants. Jeff Brooks, a Duke spokesman, said recovery will be gradual, noting “a pretty sophisticated repair with some fairly large equipment” will continue into Thursday.

Insurance claims are expected to include business-interruption claims from restaurants and others who lost perishable items and could not serve customers during the outages. Causey urged insurance companies and agents to relax due dates for premium payments; extend grace periods; waive late fees and penalties; provide options on the types of payment accepted while power is out; and refrain from cancelling or non-renewing policies until after working with policyholders to continue coverage.

The attacks, near Carthage, have raised the specter of domestic terrorism. North Carolina Gov. Roy Cooper said state and federal investigators “are leaving no stone unturned in this investigation to find those who are responsible.

“Protecting critical infrastructure like our power system must be a top priority,” Cooper said at a news conference. “This kind of attack raises a new level of threat. We will be evaluating ways to work with our utility providers and our state and federal officials to make sure that we harden our infrastructure where necessary.”

Moore County Sheriff Ronnie Fields declined to elaborate about the shootings other than to say the damage was done by gunfire. But whoever was responsible, he said, “knew exactly what they were doing to … cause the outage that they did.”

Meanwhile, traffic lights were out countywide. Drivers treated intersections as four-way stops, snarling traffic in places such as downtown Carthage amid a consistent hum of honks at each nonfunctional light.

Noah Hartford, an 18-year-old civil engineering student at Sandhills Community College, said his family has been struggling to stay warm since losing power at their home in Aberdeen. Temperatures dropped below freezing early Monday, and lows in the 40s were expected during the week.

“It’s real cold,” Hartford said as he warmed beside a fire pit in nearby Southern Pines. “It’s just me, my mom and my brother. We have a fire and stuff outside and a fireplace, but we’re really hoping we get the heat back soon.”

Kalai and Christine Balutski of Pinebluff sat under a heater Monday morning drinking warm beverages at the Red’s Corner food truck lot in Southern Pines. The couple has been without power since 7 p.m. Saturday. They said they have been driving to restaurants the next county over to eat warm meals and watch football while awaiting updates.

“We got two dogs at home, so we can’t just up and leave,” Kalai Balutski said. “We’re working off of a power brick to keep our phones charged and candles in one room to keep it warm enough to sleep.”

Bundled in a beanie, boots and a Pittsburgh Steelers jacket, Christine Balutski said she has been struggling to get work done for her remote IT job for the hospital system without home WiFi access.

About 20 people spent the night at an emergency shelter at the county sports complex in Carthage, said Phil Harris, executive director of the local American Red Cross chapter. Harris said plenty more have stopped by for food, warmth or to charge their devices.

“If you’ve got no power, you probably don’t have any heat, so with winter weather coming in, it’s a nice place to stay,” Harris said.

The Pinehurst Resort & Country Club also was affected. With limited power generation capability at The Carolina Hotel, the resort consolidated all guests into rooms with available power. Golf courses remained open but the main clubhouse was closed.

Golf is played year-round in the Sandhills region and the Pinehurst resort is the No. 3 employer in Moore County — behind the local hospital and school systems, according to government employment data. Moore County generated a record in visitor spending in 2021, leading to an economic impact of $673 million from the tourism industry, the county’s economic development office said.

Moore County has dozens of golf courses, anchored by nine at the Pinehurst Resort. Pinehurst’s famed No. 2 course has hosted three men’s U.S. Opens. The World Golf Hall of Fame is also moving soon from Florida to Pinehurst.

Andrew Wilkins, a conservation advocate who grew up in Moore County, was driving Saturday night from Washington to his parents’ small farm in Whispering Pines when he noticed the street lights were out in Carthage. He arrived to a “pitch black street.”

Wilkins spent the weekend helping his parents prepare for cold nights without heat, and linked a generator to their well to pump fresh drinking water.

Said Wilkins, “People are going to really feel the pinch from this as it goes on.”

Photo: Eden Maracco, 8, has lunch with her dad, Jeffery, at Reds Food Truck Corner in Southern Pines, North Carolina. The family was one of thousands that lost power after attacks on two electrical stations. (AP Photo/Karl B DeBlaker)