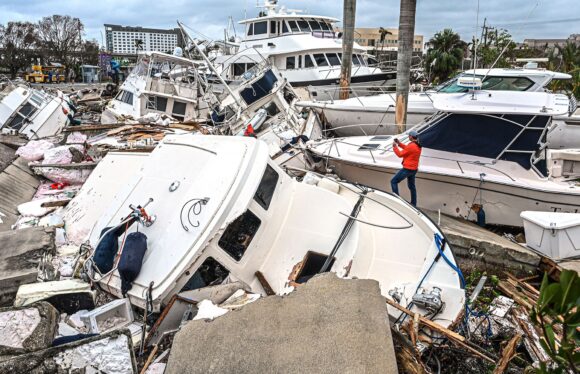 Hurricane Ian and other natural catastrophes, such as European winter storms, floods in Australia and hailstorms in France and the U.S., have cost insurers an estimated $115 billion so far this year, according to a report published by Swiss Re Institute.

This is the second consecutive year in which the estimated insured losses will total more than $100 billion, continuing the trend of a 5%-7% average annual increase over the past decade, although nat cat losses are down from last year’s total of $121 billion, Swiss Re said.

The re/insurance industry covered roughly 45% of the overall economic losses of $268 billion this year, which Swiss Re said indicates a large protection gap across the world. Economic losses (which include insured and non-insured losses) were broken down into $260 billion for nat cats and $8 billion for man-made events.

Hurricane Ian is this year’s costliest natural catastrophe with estimated preliminary insured losses of $50 billion–$65 billion, which Swiss Re estimates to be the second-costliest insured loss on Swiss Re sigma records after Hurricane Katrina in 2005.

Preliminary estimates put overall economic losses for Hurricane Ian at around $100 billion, of which approximately $60 billion will be borne by private insurers (excluding the NFIP, the U.S. National Flood Insurance Program), according to a separate report on the 2022 North Atlantic hurricane season, published by Munich Re.

Hurricane Ian was the fifth-strongest storm – alongside several previous storms with similar wind speeds – to hit the U.S. mainland since systematic records began over 100 years ago, Munich Re said.

Although the North Atlantic hurricane season produced fewer storms than originally feared, Hurricane Ian made this year’s season the third most expensive on record, with overall economic losses from all storms esimated at $110 billion, while insured losses are approximately $65 billion (excluding the NFIP), the reinsurer noted.

Despite the extreme devastation caused by Hurricane Ian, Munich Re said, the damage caused was within the scope of the scenarios used in its risk models.

For the purposes of comparison, Munich Re provided statistics from Hurricane Katrina, 2005’s record-breaking storm. “With overall [economic] losses of $175 billion and insured losses of $86 billion (both adjusted for inflation), Katrina is still the most expensive hurricane of all time,” Munich Re confirmed. “In total, the 2005 storm season destroyed assets of almost $240 billion, adjusted for inflation, of which $120 billion was insured.”

Adding to this year’s tally for natural catastrophes losses were the series of winter storms that hit Europe in February, leading to estimated insured losses of more than $3.7 billion, Swiss Re said.

Further, secondary perils such as floods and hailstorms caused more $50 billion in insured losses, which Swiss Re said reconfirmed the significant contribution that these perils add to the total insured nat cat price tag. One significant example cited by Swiss Re were the torrential rains in Australia in February and March, which led to widespread flooding. With a price tag of $4 billion, these floods are the country’s costliest-ever natural catastrophe.

Next to numerous small-to-medium-sized hail and thunderstorms in the U.S., France experienced the most severe series of hailstorms ever observed, with insured market losses reaching an estimated €5 billion ($5.2 billion), Swiss Re Institute said.

(Secondary perils are generally defined as smaller to mid-sized events, or the secondary effects, which follow a primary peril. Secondary effects of a primary peril could include hurricane-induced flooding, storm surges, hailstorms, tsunamis, and fire following an earthquake. Other secondary perils are independent events, often not modeled and receive little monitoring from the insurance industry, said Swiss Re’s sigma, which has described these types of secondary perils, in part, as torrential rainfall, thunderstorms, drought and wildfire outbreaks).

“2022 has been another year of increased natural catastrophe loss activity, and demand for insurance is growing as the protection gap remains vast. To enable the insurance industry to keep up with increasing volatility and demand, it will be key to model evolving frequency and severity trends,” commented Thierry Léger, group chief underwriting officer, in a statement.

Ernst Rauch, chief climate scientist, for Munich Re said that the nat cat events in 2022 continue a trend in recent years of increasing losses from U.S. hurricanes. “[J]ust a single storm like Ian is enough to cause immense losses. This is not new, of course, but it is important. Because it is precisely hurricanes like Ian – very strong storms with extreme precipitation – that will occur more frequently in the future due to climate change,” Rauch said in a prepared statement.

“Extreme weather events have led to high insured losses in 2022, underpinning a risk on the rise and unfolding on every continent. Urban development, wealth accumulation in disaster-prone areas, inflation and climate change are key factors at play, turning extreme weather into ever rising natural catastrophe losses,” said Martin Bertogg, head of Catastrophe Perils at Swiss Re.

“When Hurricane Andrew struck 30 years ago, a $20 billion loss event had never occurred before – now there have been seven such hurricanes in just the past six years,” Bertogg continued.