Hurricane Ian is set to become the most significant natural disaster for the insurance sector in decades after it swept through Florida and South Carolina, industry figures have warned.

Initial forecasts for the industry’s losses from the storm have reached as high as $75bn, which would make it the costliest natural disaster ever in nominal terms. In real terms, only 2005’s Hurricane Katrina, which generated insured losses of $65bn —$99bn in 2022 money — has inflicted greater losses.

Ian hit Florida’s west coast on September 28 near the town of Fort Myers as a Category 4 storm, crossed the state to the Atlantic and then went on to hit South Carolina on September 30. At least 127 people died in Florida alone.

RMS, a US-based risk modelling company, estimates the losses from Ian to private insurers at between $53bn and $74bn. Stonybrook Capital, a US investment bank, has estimated total costs for the industry at $75bn.

Billions of dollars of other losses will be borne by the US federal government’s National Flood Insurance Program and the state of Florida’s Citizens Property Insurance Corporation.

“With respect to other events, Ian has to be up there in scale of loss — comparable to Katrina if not, when all is said and done, even larger than Katrina,” said Julie Serakos, head of modelling for RMS.

Industry executives, risk modellers and analysts all expect that the storm would cement a recent shift by insurers towards levying higher premiums and avoiding some acute risks — such as Florida property — altogether.

Michael Rouse, US property practice lead for Marsh, one of the world’s biggest insurance brokers, said that since July he had detected “a little bit of a change” in the terms it could secure on behalf of its customers seeking cover in markets such as Florida. Market observers say premiums are rising and the number of companies offering coverage declining

“I think with the impact of Ian we’re starting to potentially see some further deterioration for our customers within that marketplace,” Rouse said of Florida.

Serakos compared Ian’s effect on market sentiment with that of 1992’s Hurricane Andrew. That storm was the first to alert the insurance industry to the scale of its exposure to devastating storms on the US’s Atlantic coast.

The industry had tried to make preparations to cope with a new catastrophic loss on the scale of Andrew, she said. That process has been particularly important because climate change appears to be exacerbating the severity of storms.

“What Ian is going to do is really test that system,” she said. 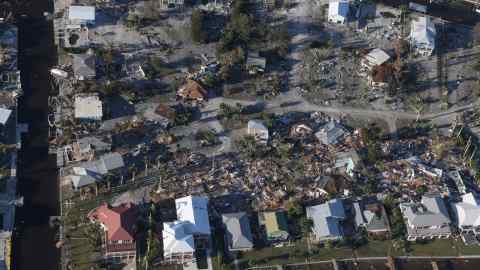 The fallout from Ian comes just as the industry was already grappling with several headwinds, including losses stemming from the war in Ukraine and billions of dollars of claims for losses resulting from the coronavirus pandemic. At the same time, higher inflation has driven up the cost of meeting many claims.

Meanwhile, losses from the storm are likely to push a further series of small, local insurers in Florida into insolvency, in a market where six have already been forced to seek protection from creditors this year.

Patrick Davison, underwriting director at Lloyd’s Market Association, which represents members of London’s Lloyd’s insurance market, said there were “clear opportunities” for the best-performing insurers in what he called a “tough catastrophe environment”.

“Market conditions, and particularly significant reductions in the capacity available to write catastrophe-exposed business, clearly present challenges for some insurers and reinsurers, particularly smaller and underperforming players,” he said.