The Group of Seven’s price ceiling on Russian oil exports isn’t low enough to take a big bite out of the Kremlin’s revenues next year and economists say even if it does lead to a drop in crude production, Vladimir Putin still has plenty of cash for his war effort, at least for now.

At $60 per barrel, “the price cap looks very generous,” said Renaissance Capital economist Sofya Donets. “It is close to what was priced in by the market for 2023 and to the level suggested in Russia’s budget.”

European officials touted the cap — negotiated last week after months of haggling among the US and its allies — as a way to starve Russia’s war machine. In fact, planners took pains to make sure the level wasn’t so low that it led the Kremlin to significantly cut production, which would risk pushing up global prices. Russia so far hasn’t announced its response, but officials say they plan to continue to divert flows to countries like China and India that aren’t formally signing up to the price limit. 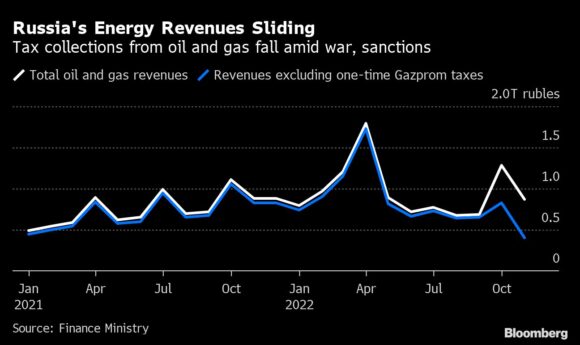 Finance Minister Anton Siluanov said Thursday it’s premature to assess the fiscal impact of the price restrictions. “We’re still now preparing a response on how our companies will react,” he said, according to Interfax. “Non-market measures distort the market and in any case, they will affect either prices or volumes of supply.”

Even without the price cap — along with the shipping and insurance restrictions aimed at hindering Russia’s trade — the Kremlin was expecting a nearly 25% drop in tax revenues from oil and gas as production and some prices fall. But even with spending rising on the war, Russia has been able to cover its budget deficit easily by tapping into its wealth fund and borrowing on the local bond market, where sanctions leave investors few alternatives.

A $10 dollar drop in the price of oil from the $70 a barrel in the budget to the ceiling may cut another 1 trillion rubles ($16 billion) in revenues, according to Olga Belenkaya, economist at Finam. In reality, the difference is smaller, since the price in the budget includes costs like freight and insurance, which aren’t counted in the price cap.

“The wider deficit will be financed either through higher borrowing or increased spending from the wealth fund,” Belenkaya said.

In fact, if the price cap reduces export earnings next year, that could weaken the ruble next year, providing an extra boost to the budget, she said. Because the energy taxes come mainly in dollars and euros, their ruble value — which is what matters to the Kremlin — grows when the Russian currency weakens.

Natalia Lavrova of BCS Financial Group said the effect may be enough to allow the government to meet its reduced energy-revenue targets for next year even if the cap keep prices below the $70 in the budget.

To be sure, the full-court press on its fuel exports to what had been its biggest markets may be more painful for the Kremlin. Economists at the central bank late Wednesday said the price cap and export restrictions may be “shocks capable of significantly reducing economic activity in the coming months.” The Energy Ministry later issued a statement disputing that assessment, saying the economic impact is likely to be limited.

The government’s current forecast of a nearly 9% drop in oil production next year will cost about 1 trillion rubles to 1.4 trillion rubles in lost revenue, according to Bloomberg Economics. Lower prices dictated by the sanctions and other restrictions on exports may shave another 500 billion rubles off Kremlin income.

“Overall the budget will experience a shortfall of around 1% GDP of revenue. We believe that the revenue shortfall will press the government into fiscal austerity, if it is to keep inflation and debt service costs stable. This would drive a deeper decline of -3% in GDP.” — Alexander Isakov, Russia economist

Russia went into the war with strong finances after years of preparing for the sanctions the invasion would bring. But the deficit this year is expected to reach 2% of gross domestic product, Siluanov said Thursday, as revenues fall and spending rises for the war effort.

The Kremlin hit Gazprom with a one-time tax increase to help offset the drop in income this year as the gas giant has benefited from surging prices even as export volumes plunged amid the war. But the oil sector remains the biggest source of revenue.

So far, the Kremlin has been able to cover the wider deficit without much trouble, tapping its wealth fund and boosting borrowing on the domestic market, where local investors have seen their alternatives narrow amid sanctions.

But Oleg Vyugin, a former top official at the Finance Ministry, warns that the fiscal pressure will only grow.

“The main problem of the Russia budget is that they want to spend far more than they can really afford,” he said. “The fact they have to tap the wealth fund to cover the deficit is a clear sign that problems are beginning.”