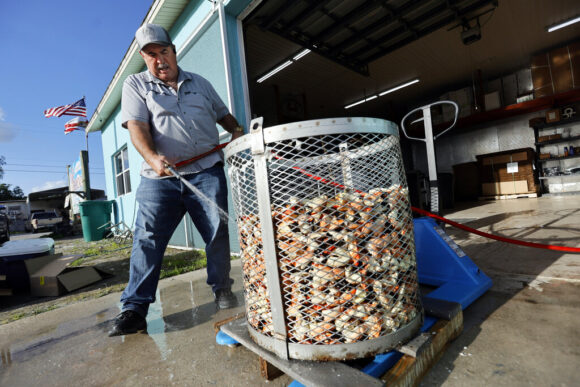 Chokoloskee and Everglades City, two fishing villages-turned-travel-destinations that sit next to each other on the cusp of Everglades National Park and the Gulf of Mexico, have seen more than their share of hurricane destruction — Donna in 1960, Wilma in 2005, and then Irma in 2017 and Ian in 2022.

Irma bludgeoned the towns with 110 mph winds and 5 feet of storm surge. The storm also picked up mud out of thousands of mangrove creeks in the Everglades and deposited up to 20 inches of it in town, covering streets, playing fields and the interior of homes and hotel rooms.

In the midst of Ian, as wind screamed against every surface and 4 feet of frothing storm surge rushed through town, it was unclear how bad the damage would be or if they would recover in time for high season.

But if you rode a bike through the two rustic towns today, two months later, it might seem like the storm never even showed up.

“It’s wide open,” said Everglades City Mayor Howie Grimm, bragging that nearly all the businesses are up and running. “We had a blueprint with Irma, so we didn’t wait around, we jumped in and went to work.”

In addition to being mayor, he runs Grimm’s Stone Crab, Inc., on Dupont Street, where you can buy stone crabs by the pound and take them home. He also supplies crabs for many of the restaurants. The shop opened on Oct. 15 for stone crab season, and is running full-throttle, he said.

Grimm took office five days before Irma hit back in 2017.

“Yeah, I hit the ground running,” he jokes. “We didn’t have as much wind with Ian, and we had 6 or 8 inches less water. So in the fish house I’m standing in, we had three foot, just over the door knob. But it didn’t have the mud Irma did. And we prepared for it.” He and his team put water-resistant tiles on the walls and “sealed it like it was a boat, so no water got into the walls this time.”

“Everglades City — that’s a region, you want to talk about some salty dogs,” said Collier County convention and visitors bureau executive director Paul Beirne, who has been keenly aware of how different tourism-driven towns along the west coast have fared. “If anybody can get back on their feet faster than anyone else, it’s Everglades City.”

He said Hurricane Ian took a heavier toll farther north, taking on a “terrible personality” closer to Naples and north.

Everglades City is some 60 miles from Ian’s landfall, and was, in a sense, spared the worst of the storm. Fort Myers beach saw storm surge of up to 15 feet in some areas, with winds to 150 mph.

In Everglades City, only a handful of businesses have not reopened, including the Circle K and the Post Office, which share a parking lot, and Speedy Airboat Tours, which the mayor said caught fire during the storm, and remains closed.

“The water came in extremely fast,” said manager Taylor Caple of Hurricane Ian’s impact. “We got about 5 feet of water.” The main building, which holds the restaurant, and whose wooden walls are festooned with trophy tarpon and antique fishing lures and guns, is elevated about 8 feet above ground. “We’re very fortunate that nothing got into the main building,” she said.

Their cottages, where overnight guests can dock their boats, are on ground level and took a hit.

“We had to remove the floor, drywall, and pretty much completely remodel all 17,” she said. “It was not fun but we got it done. We’re pros after Irma.” It took them only three weeks to finish and start welcoming guests again.

She estimates that under normal circumstances, about 50% of their high-season clientele are from out of state, and suspects Ian’s overall damage, especially to the beach areas closer to Fort Myers, may deter some potential travelers from up north.

Occupancy has been “pretty good,” she said. “We don’t think it’s going to be as busy as normal. We’re not doing bad. We just had a huge group come in, a party of 60.”

Looking back at the past few years of business, she said that the COVID pandemic really put them on the map for folks from Florida’s east coast.

“Every public boat ramp was closed down, but we have a private boat ramp so we were able to be open. Oh my gosh, our boaters were all from Miami, Fort Lauderdale, Boca. It was unreal. I’ve never seen our boat ramp so busy.”

But their hallmark dish, which they’ve been serving for 30 years, is the grouper a la Roxie. The chef broils the filet, plates it in a white wine butter garlic sauce with sauteed onions and tomatoes, and tops it with melted provolone cheese. Another menu highlight is the fried local lobster tail “loaded” with Colby jack cheese, Cajun sauce and crumbled bacon. And of course they offer stone crabs. They’ll also cook your catch if you’ve been out fishing.

Kayaking, one of the major draws of the area, may have actually improved from Ian’s impacts.

Dillon Griffin, a kayak guide who operates out of Ivey House Everglades Adventures Hotel, is out on the water every day, educating customers on the ecosystem as they paddle through mangrove creeks and oyster bars.

Griffin said that though the human world takes a beating, “Ian was mother nature’s cleansing,” of the mangrove creeks and oyster bars he paddles through. “It removed some of the debris that needed to be taken out.” His company also offers kayak rentals, powerboat fishing charters and will take customers out on overnight kayaking camping trips into the remote 10,000 Islands.

South of Everglades City, in Chokoloskee, the historic Smallwood Store sits in about as vulnerable a spot as you can find, right on the western point of the island, facing the bay. The view is lovely, but dangerous in a hurricane.

Owner Lynn McMillin’s grandfather, Ted Smallwood, built the trading outpost in 1906, buying furs, hides and farm produce and selling the tools one needed to survive on the swampy frontier. Now McMillin runs the store as a museum of frontier life and a gift shop selling Everglades and Florida-focused novelties.

“It’s been a process of cleaning up. But we’re in a lot better shape than when Irma hit. There were a lot of people that got devastated with the flooding, but it was not as bad. It was close, though.”

She’s feeling the ripple effect of the destruction upcoast, though — some of her souvenir and T-shirt wholesalers lost everything in their warehouses, so she’s had to find other sources.

“There are just things I’m not going to sell,” she said, “But I’ve got the gator heads!” Turns out she’s got an inside source _ her granddaughter lives on a gator farm.

Other than gator heads, she said one of the main attractions is a Coke machine from the 1940s that still works. “Everybody gets a kick out of the fact that they can go get a Coke out of it,” she said.

The store also offers powerboat tours in Everglades National Park, and they shuttle people out to islands for camping. She also runs a two-bedroom rental cottage a few feet from the water. “I have the best snook light on the island,” she boasts. “At night on a slack tide, it’s a lot of fun.”

There’s also a beloved food truck, Boat Wreck BBQ and Seafood, which sets up in the store’s parking lot. Seafood changes by the day, depending on the catch, and they serve a local favorite, smoked mullet.

Of her family’s store, she said, “It’s been there for over 100 years and it has come through like a champ. I don’t want to brag too much, but I’m awful proud of it.” Her grandfather first built the store on the ground but raised it on pilings almost 100 years ago, in 1924, after a storm.

Still, when a hurricane comes through, “It’s very nerve wracking.”

During Irma, her pool filled with 4 feet of mud along with a refrigerator, a tree, and tropical fish she thinks came from Cuba. “That was a horrible mess to clean up,” she said.

McMillin said she has a hurricane tradition she picked up from a family friend, Seminole chief James Billie.

During a previous hurricane, he lashed a hatchet to a chickee he’d built on the property. “I said, `What the heck are you doing?”’ Billie explained that the idea is that hatchet splits the storm so it goes around the property, like a good luck charm, keeping it safe.

“So I put a hatchet on a piling down at the store every time,” she said. “It makes me feel a little bit better at night.”

Photo: Howie Grimm rinses more than 300 pounds of cooked stone crab claws at Grimm’s Stone Crab in Everglades City, Fla., on Friday, Dec. 2, 2022. Grimm who is also the town’s mayor, says now that most of the Hurricane Ian repairs are complete, “The town is open and working and hopefully we will get some people out here to enjoy it.” (Amy Beth Bennett/South Florida Sun-Sentinel via AP)