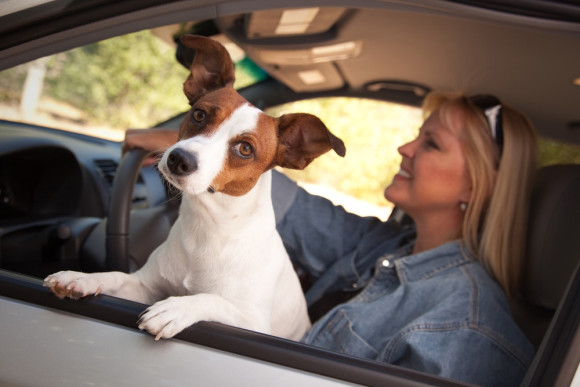 New Hampshire is the only state that allows adults to drive without wearing seatbelts. Want to use your dog instead? Go for it, for now.

While the state currently has no lapdog-related laws, the Legislature is considering a bill that would make it illegal for someone to drive with “an animal of any size on their person.” The proposal is likely a longshot in the “Live Free or Die” state, but it’s generating plenty of debate.

“I never in my wildest dreams thought that this would become one of the more controversial bills of the session, but by God, here we are,” said the sponsor, state Rep. Jennifer Rhodes.

Rhodes, a Republican from Winchester, drafted the bill after watching a young girl nearly get struck by a car driven by a man holding two small dogs with one arm and petting them with the other. When her rage subsided, she decided to take action.

“I had a golden opportunity to make a positive change, so I did it,” she said. “I thought it was a no brainer.”

But as word got around, angry emails arrived. One writer, whom Rhodes declined to identify, argued that a well-behaved lapdog would be less distracting than an animal whining from the backseat.

“If I am driving my ill dog (or cat, or other pet) to the vet for medical attention or to be euthanized, you can bet your bottom dollar that I will have (and have had) that animal in my lap for that possibly final trip with them,” the person wrote. “Please stay out of people’s cars and let people have a small slice of happiness in the sanctity of their own vehicles.”

Hawaii is the only state that specifically prohibits drivers from holding animals on their laps, Rhodes said, though such drivers could face charges under broader distracted driving laws in multiple states. Rhode Island requires pets in vehicles to be restrained or under the physical control of someone other than the driver, while in New Jersey, pets in moving vehicles must be secured in a carrier or wear seat belts. The New Hampshire bill, which subjects violators to $100 fines, doesn’t go that far.

The bill has the support of Cheshire County Sheriff Eli Rivera, who told the state House Transportation Committee last week that he has seen drivers with dogs of all shapes and sizes on their laps.

“I’ve seen dogs running back and forth between the front seat, the back seat, looking out one window, looking out the other window. I’ve seen drivers holding a pet with their left hand, and they’re trying to look over the dog as they are driving down the road,” he said. “It does cause a hazard.”

Maria Doval, of Hopkinton, said she will abide by the law if it is changed, but for now, lets her dog ride on her lap to his grooming and veterinary appointments, plus weekly trips to doggie day care. Pancho, a 7-pound Maltese Shih Tzu with extreme separation anxiety, hates the car but remains calm if Doval keeps a tight grip on his harness as she drives.

“He’s literally just looking out the window from my lap,” she said. “He’s not free roaming, because I think that could be a distraction.”

While Rhodes said she has faced pushback from people “who really don’t want to be told what to do” on principle, she said most of the opposition comes from people who genuinely love their pets.

“They think that I’m somehow punishing them, when I don’t look at this as punishment in any way, shape or form,” said Rhodes. “I’m looking at it as the safety of the pet.”