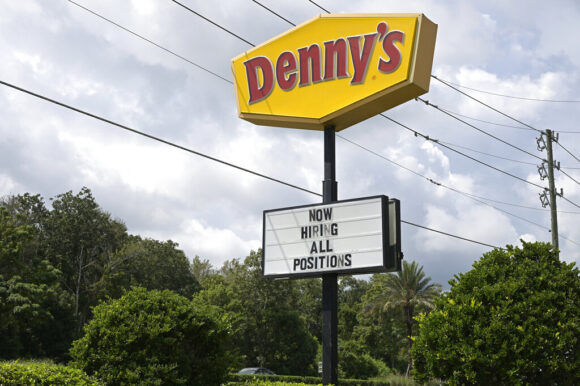 A woman died and her daughter was injured last week in central Kentucky after high winds caused a Denny’s restaurant sign to fall on their car.

News outlets reported that the 1.3-ton sign crushed the car in Elizabethtown, about an hour’s drive south of Louisville. Lillian Curtis, 72, died at the scene after a severe head wound. Her husband, Lloyd Curtis, was hospitalized and her daughter, Mary Graham, was released from the hospital after she was treated for chest injuries, the Curtis’ granddaughter told news outlets.

A local police official told a TV news station that he had never seen anything like the accident. The family was on their way home to Columbus after picking up Lloyd Curtis at a hospital following heart surgery. They had pulled off the highway because of the high winds, when the sign was ripped off its moorings atop a pole believed to be as much as 80 feet off the ground.

Denny’s restaurant officials said that safety is a top priority for the company and they are working with local authorities to better understand the cause of the incident.

A crane removed the huge sign, according to news reports.

Photo: File photo of a Denny’s sign similar to the one that fell last week in Kentucky. (Phelan M. Ebenhack via AP)