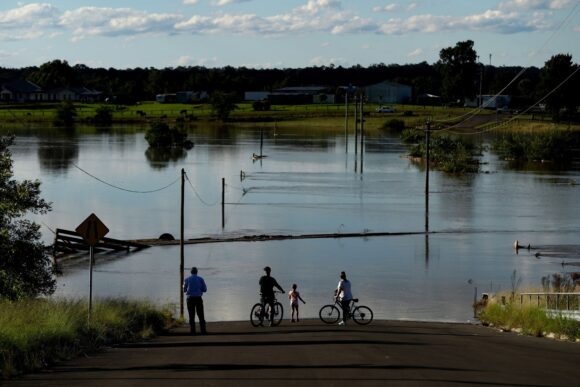 Public data on natural disaster risks for homeowners and businesses will be crucial for making Australia’s economy more resilient to climate change, according to the head of sustainable finance at National Australia Bank Ltd.

There’s a growing collective effort by national regulators, state governments, insurers and banks to address impacts of a warming planet that should also include work by the Treasury to publish risk data for real estate, according to David Jenkins, global head of sustainable finance for National Australia.

The call for more data on climate change highlights the importance of Australia’s A$9.7 trillion ($6.5 trillion) housing market in the nation’s economy. The country, one of the world’s biggest per-capita polluters in part because of its role as a major fossil fuel exporter, is also one of the nation’s most vulnerable to severe climate change.

A study released on Wednesday [Nov. 30] by Australia’s banking regulator into the impact of a warming world showed lenders would be more vulnerable to economic downturns in the coming decades, but that the impact could be absorbed. For Jenkins, one of the key challenges is being transparent with the information itself. (Editor’s note: The report from the Australian Prudential Regulation Authority is titled: “Climate Vulnerability Assessment Results.”)

“The biggest one is the data,” Jenkins told the Australian Securitization Forum in Sydney on Thursday. Giving individuals and businesses access to this information would help make them “aware of the risks they face in this area.”

Speaking on the same panel, Chris Stankovski, senior director for structured finance at Fitch Ratings, said credit ratings for residential mortgage-backed securities portfolios are unlikely to face a “climate subprime” risk, because of their geographical spread relative to insurance events.

Still, flooding is the most expensive but also the most predictable and preventable form of natural disaster, according to Insurance Council of Australia Chief Executive Officer Andrew Hall. Resiliency and mitigation might be better strategies than government-funded reinsurance schemes, he said.

“The penny is dropping because government now is investing so much money in the recovery,” Hall said.

Photograph: People look out at floodwaters from a closed road in the suburb of Pitt Town Bottoms in Sydney, Australia, on Wednesday, March 24, 2021. Photo credit: Brent Lewin/Bloomberg