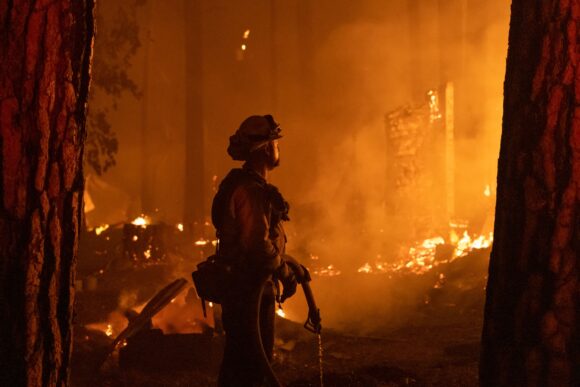 A new report shows California utilities have noticeably reduced their liability following catastrophic wildfires in the past that have been blamed on the utilities and have driven several massive lawsuits and financial challenges.

The report forecast that “significant investment in wildfire mitigation measures” will further improve the ability of California’s three dominant investor-owned utilities to withstand the financial impact of wildfires in their territories.

“All three have redoubled their efforts to harden infrastructure and to adopt new technologies and strategies to reduce ignition risk originating from power lines and other utility equipment,” the report states. “As a result, each utility will be better positioned to limit their liability exposure to wildfires in the future.”

The utilities have been hammered by lawsuits and regulators in the last few years. In October, former executives and directors of PG&E agreed to pay $117 million to settle a lawsuit over 2017 and 2018 California wildfires sparked by the utility’s equipment. Federal officials recently launched a criminal investigation into PG&E’s potential role in starting California’s largest wildfire of the year.

Over the past three years, California wildfires linked to faulty utility equipment have caused less damage than previous wildfires. Structural damage caused by utility-related wildfires accounted for 34% of structures damaged in 2017 and 89% in 2018. Since then, that share has declined significantly.

Despite the improvements, risk in California from major wildfires “remains an urgent,” the report states.

“California remains highly vulnerable to fast-spreading wildfires, regardless of the source of ignition,” Moody’s states. “California’s efforts to suppress wildfires have inadvertently led to the significant accumulation of grasses, shrubs, dead trees and fallen leaves and pine needles, which can fuel wildfires. Meanwhile, climate change has increased wildfire risk by making it easier for fires to start and spread and by making trees more vulnerable to diseases and insect infestation.”