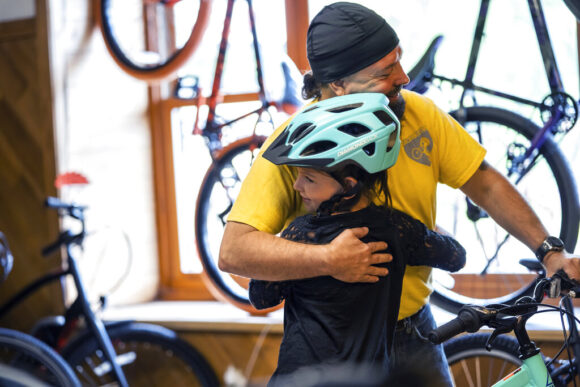 A Michigan Army veteran who turned his life around with a bike shop died in a crash while delivering free bikes to children in Florida affected by Hurricane Ian, his family said.

Steven Pringle, 57, was killed in Punta Gorda, Florida, on Nov. 23, a few weeks after a profile in the Detroit Free Press described how his passion for fixing bikes had touched many people in Michigan’s Upper Peninsula.

“One lady said, `We couldn’t afford a bicycle, and your father gave my son a bicycle.’ I was really blown away at the impact that he had,” Pringle’s son, Jason Pringle, told the Free Press last week.

Someone placed a bike, painted white, at the scene of the Punta Gorda crash, a common memorial to victims of fatal collisions. There’s a message on the frame: “May the legend live on.”

Pringle was driving a pickup truck with a trailer of bikes when he drove through an intersection that was missing a stop sign due to the hurricane, the Free Press reported.

Pringle earlier this year told the newspaper that he had been in despair, eating poorly and living in a camper when he had an awakening while praying the Catholic rosary. It eventually turned into Build a Bicycle — Bicycle Therapy, a shop in Kingsford where he fixed bikes, sold new ones and gave many away.

“I’ve had people in the beginning who told me, `You donate too much,’” Pringle said. “But the more we donate, the more that comes back at the end of the day. I don’t need money. What am I gonna do with it, collect it and save it?”

Photo: Steven Pringle gets a hug of appreciation in July, after he presented Kadence Horton with a new bike. The Michigan bike shop owner died in a crash in Punta Gorda, Florida, while delivering free bicycles to children affected by Hurricane Ian. (Ryan Garza/Detroit Free Press via AP)