Beware of Foraging Bears in Hyperphagia Dealing With Acorn Shortage 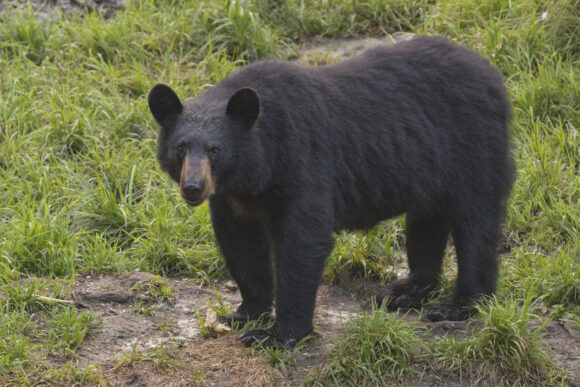 Wildlife officials in Connecticut are warning residents against feeding bears particularly over the next few months as the animals step up their hunt for the extra food they will need before hibernating for the winter.

According to the Connecticut Department of Energy and Environmental Protection (DEEP) during fall, bears forage for calorie-packed nuts and seeds for up to 20 hours a day in a race against the clock. This annual power-eating marathon is called hyperphagia. During hyperphagia, bears need to eat 20,000 calories a day, which is 10 times the calories they normally consume.

Their goal is to put on as much weight and insulating fat as possible before turning in for the winter. But it is dangerous for both bears and humans if humans make it easy for bears to find food.

“Black bears should never be fed – either intentionally or unintentionally,” said Jenny Dickson, DEEP wildlife division director. “Bears that are attracted to homes by easily accessible foods lose their fear of humans. Bears that are rewarded by easy meals spend more time in neighborhoods and near people, increasing risks to public safety, the likelihood of property damage, and the possibility that the bears may be hit and killed by vehicles.”

The state has already tracked a record number of bears breaking into homes, with 69 incidents this year far surpassing the previous record of 45 in 2020.

Dickson adds that it takes many hours of foraging each day for bears to find 20,000 calories’ worth of nuts and berries. But just one bird feeder full of sunflower seed or one garbage container with leftovers can reward a bear with a day’s worth of calories for less than an hour’s work, making human-provided foods even more tempting.

The bears face a particular challenge this year. According to state agricultural experts, Connecticut experienced a widespread acorn crop failure in this season. Fall acorns are an important food source for black bears and the lack of acorns this year will cause bears to look for other food sources, including human-associated food, which officials worry could add to growing public safety concerns associated with their continuing population expansion.

The black bear population in Connecticut is estimated to be greater than 1,000, and bears can be found in any of the state’s 169 towns.

As the bear population continues to grow, and bears become increasingly food conditioned, officials are concerned that conflicts with humans will continue to increase. This is a problem because food-conditioned bears pose a greater risk to themselves as well as public safety, and often cause more property damage to houses, cars, pets, and livestock.

With two months remaining in the year, DEEP said it has already tracked a record number of bears breaking into homes, with 69 incidents this year far surpassing the previous record of 45 in 2020.

DEEP has several best practices for residents to reduce the likelihood of an encounter with a bear, available online on DEEP’s “Living with Black Bears” website. DEEP has also created a video incorporating many of these best practices.

Rule #1 is to make every home and yard a no-food-zone for bears. The most important step is to remove food attractants, such as bird seed and unsecured garbage.

Another tip is to supervise dogs at all times when outside. Dogs should be kept on a short leash. A roaming dog might be perceived as a threat to a bear or its cubs.

In the rare instance when a bear appears to be aggressive toward people, residents should immediately contact DEEP’s 24-hour dispatch line at 860-424-3333.

Bear sightings reported by the public provide valuable information to assist DEEP in monitoring changes in the black bear population. Anyone who observes a black bear in Connecticut is encouraged to report the sighting on DEEP’s website or call the Wildlife Division at 860-424-3011. Information on the presence or absence of ear tags, including tag color and numbers, is particularly valuable.