Last month the French insurer agreed to sub-underwrite €200mn of the €900mn offered to private investors, providing a lifeline to MPS as it tried to plug a capital shortfall though its seventh rights issue in 14 years.

Many investors had shunned the deal because of MPS’s dire record: a series of scandals, government bailouts and high profile court cases. The Italian government, which rescued the bank in 2017 and still holds a 64 per cent stake, contributed €1.6bn of the overall €2.5bn capital raise.

Axa, which has lost about €1bn on MPS equity investments over the past 15 years, nonetheless stepped up.

According to people close to the matter, Axa is negotiating a fresh deal with MPS over a joint venture in which the Italian bank’s commercial network distributes a range of life and damage insurance policies.

The negotiations are likely to yield more lucrative commission fees for Axa and potentially extend the arrangement beyond its current term of 2027, according to these people. Under Italian financial regulation, a formal statement must be issued only once the terms of the agreement are formally revised. This will “probably happen next year”, the people said.

Axa notified Italy’s financial regulator, Consob, before the rights issue was launched that it had activated its “related parties transactions committee”. Under Italian rules, the procedure must be activated when parties involved in any form of negotiations are related to each other through an investment, shareholding, or other economic interests.

Axa said: “There has been no change in our relationship with MPS, no commitment, no amendment to our agreements.”

The insurer declined to comment on the formal activation of the “related parties transactions committee” and the notification to the Italian financial regulator.

Under EU rules, the state can only take part if all investors — public and private — are subject to the same conditions. 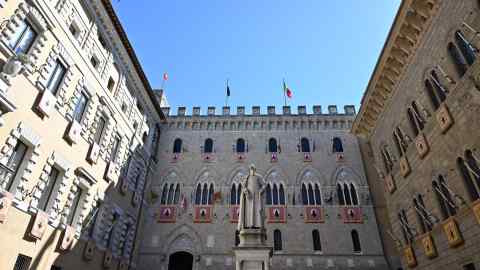 Earlier this month, MPS said overall take-up had been 96.3 per cent, including the Italian treasury’s contribution, and the underwriters, which include Bank of America, Citigroup, Mediobanca and Credit Suisse, that received a €125mn fee in exchange for their backing, will be left holding just €93mn.

Beyond the taxpayers and Axa other backers of the rights issue include MPS commercial partners such as payments provider Nexi and Italian asset manager Anima, junior bondholders, Italian banking foundations and a few pension funds directly controlled by the Italian treasury.

Over the summer, MPS and Anima began discussing an amendment to the terms of their existing commercial partnership. The Milan-based asset manager publicly said it was considering a contribution of up to €300mn to the rights issue in exchange for an improvement in the economic conditions of their partnership. It ultimately contributed just €25mn after negotiations broke down and Anima said it had opted for a “merely financial investment”.