Aviva has begun insuring offshore wind projects and is running a pilot for covering sustainable building materials such as engineered timber, as the FTSE 100 insurer reshapes its underwriting book to meet its climate ambitions.

The insurance group, which stopped insuring fossil-fuel power generation projects four years ago, has been building up its renewable energy insurance book in areas such as onshore wind, solar and battery storage — aiming to be the number one insurer of renewable energy by 2027. Last year, it started providing coverage to electric vehicle charging points.

Adam Winslow, head of Aviva’s general insurance business in the UK and Ireland, said individuals, companies and countries “all have to play their role” in the transition to a climate-friendly economy.

“If we are not covering the transition, if we are not helping to cover renewable energy sources as the power grid is shifting, we are not doing a good enough job,” he added.

Aviva is now offering construction and operational risks for offshore wind in London’s insurance market, a hub for specialist insurance, underwriting on what is called a “follow” basis where it adds insurance capacity behind a lead insurer. Aviva has already insured its first client in the North Sea and plans to expand its underwriting team behind the wider effort.

Based on the projects coming through, the European offshore wind market could generate $2bn-$3bn of gross written premiums by 2030, the insurer estimates.

Aviva is separately doing a pilot project on insuring so-called hybrid buildings — which use a greater amount of sustainable materials such as engineered timber — both in the construction phase and once they are built. Insurers usually shy away from materials such as timber owing to the fire risk.

“We are working on a test-and-learn basis with a handful of select developers and brokers, who understand and will invest in the long-term sustainability and resilience of a building and embrace the need for risk management in the design phase,” Winslow said.

He said the industry had a responsibility to “apply its risk management expertise to a whole new set of challenges that we face due to the impact of climate change”. Aviva has previously called for greater testing and knowledge of new building materials in homes and offices. 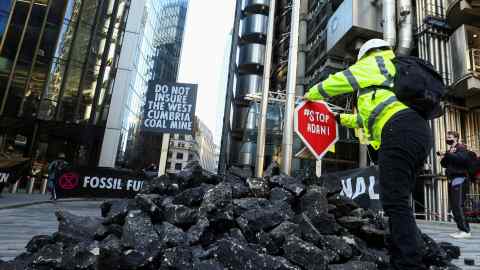 Like other diversified insurance groups, Aviva has already funnelled investor money into renewable projects through its asset management arm. Last year, the FT revealed that the insurer was also exploring investing its own balance-sheet capital in climate-friendly projects.

Moving away from carbon-intensive sectors in their underwriting books has been a slower process for companies, but easier for those that do not have a historic bias towards specialist commercial risks.

Aviva said the renewable energy businesses and projects it underwrites were the equivalent of 31.5mn tonnes of carbon dioxide each year, and that this business was already more than double the size of the fossil-fuels book it shed four years ago.

The insurer, which is aiming to reach net zero in its carbon impact by 2040, has previously acknowledged that it has assets and business relationships associated with “significant emissions” but is reviewing these arrangements to be able to meet its goal.